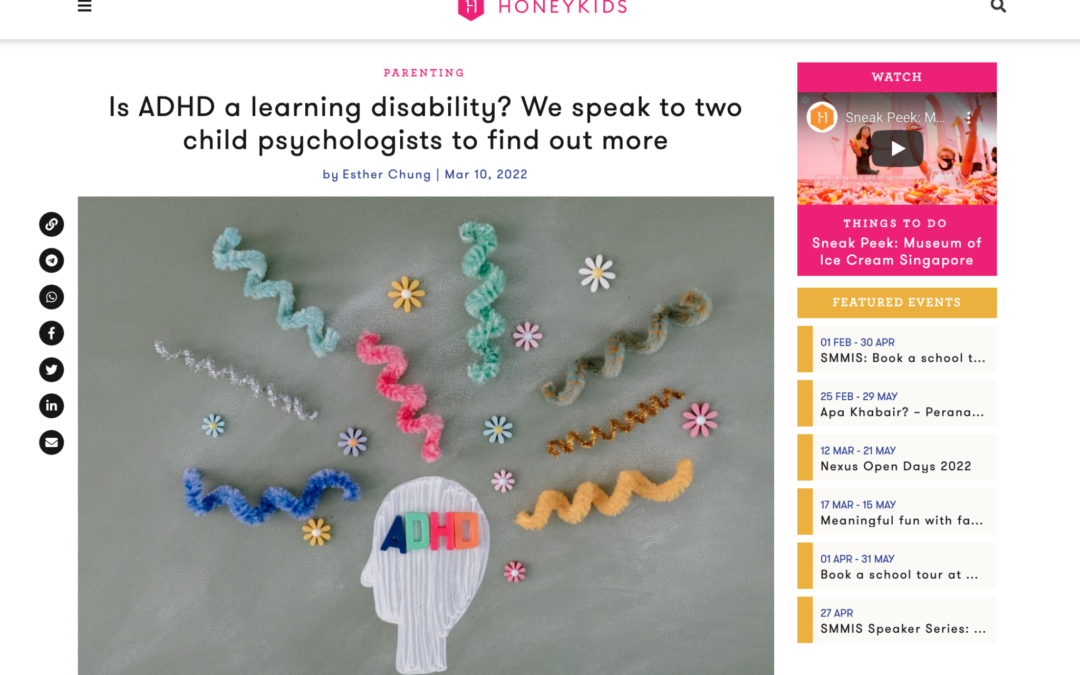 While most of us may be familiar with the term ADHD or Attention-Deficit Hyperactivity Disorder, we may be unfamiliar with the challenges and struggles a child diagnosed with ADHD goes through.
Our senior psychologists from the Child and Adolescent team, S. C. Anbarasu and Tan Su-Lynn, spoke to the editorial team at HoneyKids Asia to shed more light on ADHD, how it affects kids, what are the early symptoms, and how parents can support a child with a diagnosis.
https://honeykidsasia.com/promises-healthcare-psychologists-explain-adhd 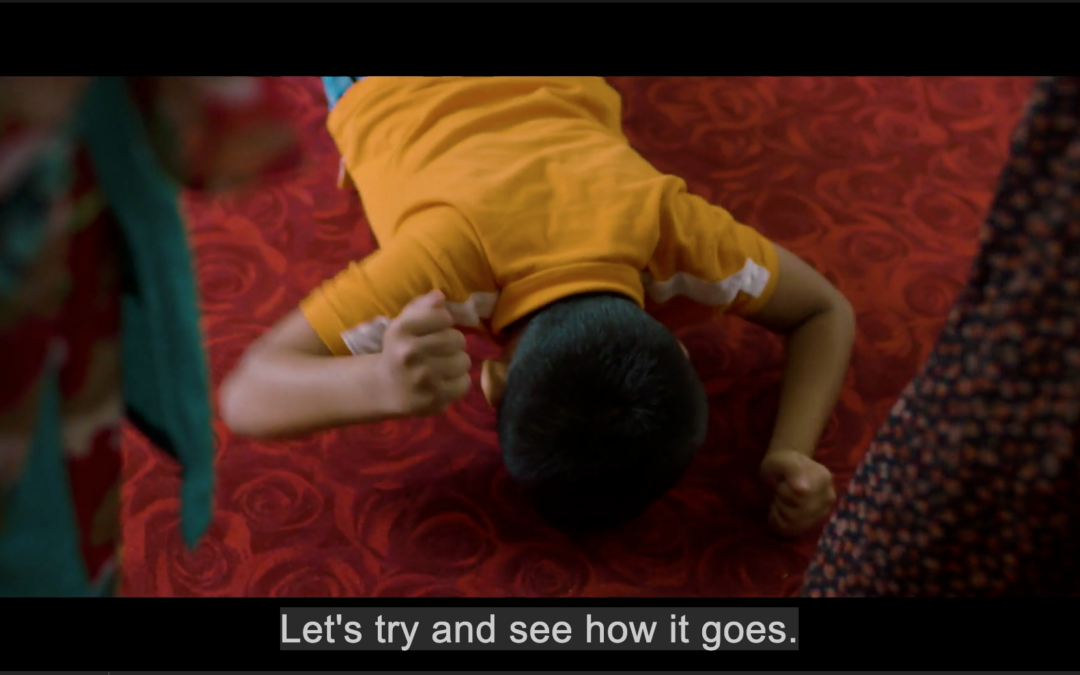 In En Ullae S2 episode 9, we are introduced to an exuberant boy, who upon closer inspection is revealed to suffer from Attention Deficit Hyperactivity Disorder (ADHD). Is he beset by developmental issues, or is there a more benign explanation? Senior Clinical Psychologist S.C. Anbarasu opens the episode with a parsimonious explanation of ADHD – simply, people with ADHD are distinguished by a lack of ability to pay attention, and appear to have vast amounts of energy, hence, ‘hyperactivity’.

In a dramatisation, the boy’s mother wears an expression of bemused exasperation – the problems began even before his birth. Prolonged labour (which occurs after 18 –  24 hours), and a possible Caesarean section heralded the coming of a “problem child”. Anusha Venkat then recalls how, at the age of 2 or 3, she came to the realisation that her son’s inability to focus was far more prevalent than what she observed in other children. Even a couple of seconds of concentration seemed to be a hard ask. He couldn’t remain placated long enough to complete any task. At the childcare, teachers baulked at how he pinged from corner to corner of the room.

Anusha reveals how a serendipitous discovery that Carnatic music could calm him down enough to remain in one spot for more than 10 minutes. A breakthrough! Anbarasu explains that while a child suffering from ADHD can disrupt classroom proceedings, it is pointless to use force to discipline them. ADHD can make someone feel like they are “constrained within a container” if they are impelled to do a task in which they have no interest. Instead, they expend their energy reserves by indulging in some other activity – like running around and being a little menace. For parents who are unaware of ADHD as a mental health condition, seeing their child act out can be scary. In fact, Seelan (the boy protagonist) went undiagnosed at age 3 – doctors merely offered that most children are, well, rambunctious tots at that age. It takes a diligent parent to make a reasoned conclusion that their child may suffer from ADHD. Seelan was given assorted tasks to complete, with his attention span closely watched, even who he liked or disliked in class was logged.

However, Anbarasu recommends that care must be taken to conduct a diagnosis per the Diagnostic Statistical Manual (DSM-5). First, the test must be conducted on children below the age of 12. While school-going children come with a larger raft of observable behaviours due to differences in environment (home, school, etc), Anbarasu admits that is is not easy to chalk up roughhousing or rowdiness to ADHD when those are developmentally appropriate behaviours for a child. Apparently, six or seven are ages when an accurate diagnosis is reached easiest.

Aside from Carnatic music, Seelan’s attention span was helped by repetitive menial tasks like peeling potatoes, chopping ladies’ fingers and carrots. Anbarasu acknowledges that dealing with ADHD in children is a time-consuming task because they aren’t able to complete tasks as quickly as their peers. He calls on parents to pick up the slack – strategising holistic ways to help their child, both at home and in school. It’s a collaborative effort between teachers and parents to then carry out an agreed-upon strategy.

All is not doom and gloom, however. Seelan is observed to play with Lego building blocks for hours on end, despite not performing in the classroom. Anbarasu calls this ‘hyper-focus’. It is a state of mind wherein the mind eliminates noise that potentially distracts them from the task at hand, a sort of “perk” if you will. We are cautioned that encroaching upon this state of hyper-focus can exacerbate emotional issues and precipitate anger. People with ADHD are victim to ‘emotional dysregulation’, which may manifest from frustration in perceived inability to complete tasks satisfactorily. Seelan was unable to appreciate the benefits of delayed gratification, getting restless and upset if things didn’t go his way. Anbarasu explains that this results from emotional dysregulation as well.

At some point, Seelan faces potential expulsion from his class due to the complaints of other children’s parents. Especially in Singapore, where grades are paramount, a poor academic performance which results from an inability to work with a child’s ADHD can be distressing to parents. The teeth-gnashing frustration can make parents feel helpless, and Anbarasu suggests that these situations call for a consultation with a professional therapist who will elucidate the behavioural issues at hand. This gives parents more information to plan future steps. Parents of children with ADHD also attract stinging criticism from other parents. They might feel inadequate in their roles as nurturers and mentors. Anusha has accepted this to be a part of life, chortling as she muses that “you can’t change people”. Whatever the case, it isn’t fair to fault parents for a child’s ADHD. Or the child. Anbarasu clarifies that ADHD is a neuro-developmental disorder – in other words, that’s just how the cookie crumbles. Blame should not be apportioned. Anusha recalls how Seelan used to behave like an attention hog – in its absence, tantrums would be the order of the day. According to Anusha, dealing with instances of emotional dysregulation like this is challenging, especially if you have to deal with the needs of your child while observing social propriety.

Every child’s circumstances are different, so Anbarasu recommends that care be taken to evaluate if danger is imminent. Shouting for a little is perfectly OK. Deal with them after they have thrown their fits because anger is not conducive to receptiveness to advice. Anbarasu is careful to eschew the notion of a “cure” for ADHD. Rather, he says that it is “treatable”. Whether with medication or psychotherapy, or a combination of the two.

Children with ‘combined-type’ ADHD are challenged in a triune of areas – attention, hyperactivity and impulsivity. For these cases, neuropharmacological support is required, to aid concentration and retention of information in class. If the ADHD is not as pronounced, therapy alone could manage the condition. For parents who are especially harrowed by their child’s condition, they should know that there is ample evidence in favour of managing ADHD through the concurrent administration of medication and therapy. On top of psychiatric interventions, there are support groups inside and outside the classroom for parents who are overly stressed.

The episode closes with the narrator speaking over clips of Seelan looking positively cherubic. The viewer is called on to spare the snide remarks, replacing them with positivity, understanding, and “plenty of support”.